Students at Alice E. Grady Elementary School came away from their recent monthly Fitness Friday with much more than a good workout. On March 29, 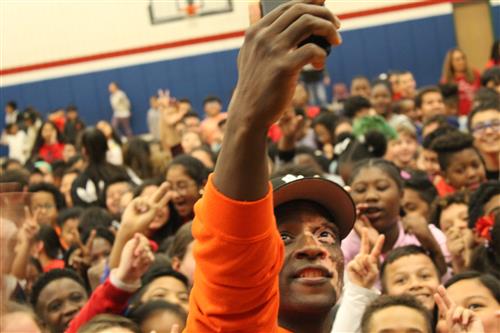 they met James McLeod and heard first-hand how a person can persevere when life becomes difficult.

Physical education teacher Drew Watson, who knows Mr. McLeod from his gym, introduced the special guest to students because of the experience and powerful message Mr. McLeod has to tell.
“Every time I saw him he’d say ‘hello,’” Mr. Watson said of his trips to the gym, where Mr. McLeod is a personal trainer. “He was the only trainer to say ‘hello’ to me. I got to know him better and began to learn his story.”

It was this story that Mr. McLeod shared with students in order to inspire them to treat others with respect and strive to do their best in life.

Growing up, Mr. McLeod was bullied. He stood out among others due to vitiligo, an autoimmune disease which causes loss of skin color.

Classmates would tease him and call him “zebra” or “cow,” he said.

He thought sports would be a great outlet for him to relieve some of the pain he felt from being bullied. However, the kids on the basketball team were not terribly friendly either.

One day, he decided he was not going to let what the other kids were doing bother him. It would not be easy, but he was determined.

“I began looking at myself in the mirror and telling myself positive affirmations,” he said. “My smile became my best friend.”

He went to school with a smile on his face. He said “hello” to anyone he met and he took his positive attitude wherever he went.

“They could no longer tease me because I was too happy,” Mr. McLeod said.

As time went on, the trainer said classmates began to “no longer see me as this ugly monster.”

Today Mr. McLeod is known as the “That Vitiligo Guy” having fully embraced his condition and new attitude.

Mr. McLeod went on to tell students that it does not cost anything to smile and be friendly to others.

“You can be anything you want to be,” he told students. “For me, I made the choice to be the best I could be.”

He became a personal trainer, a DJ, and a motivational speaker. He can now add author to his résumé. During the event, Mr. McLeod read from his first children’s book, “The Boy Behind the Face,” which tells his story.

“My name is James and I’m a superhero,” the book begins. “My superpower is bravery, kindness and love.” 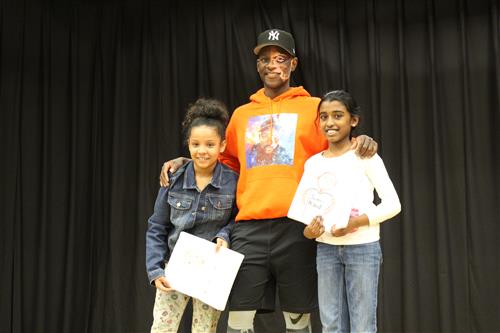 Mr. McLeod said his mission now is to motivate others to be kind and strive to be their best.

Students had learned about Mr. McLeod before he arrived at their school so they would know something about him. A select group of students shared with him words they used to describe him and what he has overcome.

“Inspiring,” “brave,” “a fighter,” “confident” and “a leader” were some of the words they had selected.

Mr. McLeod’s message was reflected in the monthly ritual students participate in during Fitness Fridays. Students have the opportunity to write a “thank you” to someone else in the school. They write down on a special certificate why they are grateful for this other person and feel they deserved to be thanked. The students pass out the certificates to one another at the end of the event and students share with one another why they were selected. Mr. McLeod handed out the certificates with a high-five.