It was a beautiful day to start a new school year

The sun shone brightly on the morning of Sept. 3, bringing with it a sense of excitement to the educational community in Elmsford. It was the start of a brand new school year!

They were greeted with smiles and high-fives by Superintendent of Schools Marc Baiocco and Assistant Superintendent of Business, Linda Carlin. Members of the Elmsford Police Department helped direct traffic, from pedestrians to parents dropping off their children to buses bringing in students. 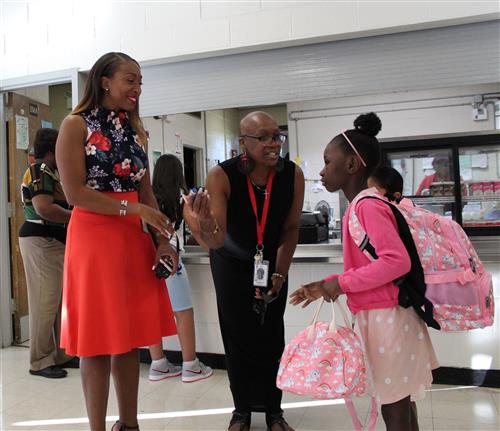 Not too much later, a slow parade of buses began to arrive at the Alice E. Grady Elementary School.There was already a line of parents and students waiting to get into the building by the time Dr. Baiocco made his way over to the school to greet the elementary students. They were soon joined by more students and parents.

One new Grady student hopped from one foot to another as she told the superintendent she was so excited to be at her new school after having been a student at the Carl L. Dixson Primary School.

There were other students who were new to the school district and were meeting classmates and teachers for the first time.

New Grady Principal, Dr. Andrea Hamilton, met students and parents in the cafeteria and reassured them that the teachers would be there soon to escort students to their classrooms, and that their children were in good hands.

Veteran students at Dixson — those going into first grade — seemed to know what was expected as they too were greeted by their principal, staff and the superintendent. The older students met in the playground area, arranging themselves into groups according to their class. The pre-kindergarten students sat stoically on the school steps where they were welcomed by their teachers. They also received reassuring hugs and encouraging words from their parents at what is the very beginning of their educational journey.

“Today is one of those special days,” Dixson Principal Jeffrey Olender told parents. He added the goal for the day was to keep the students from shedding tears, but joked he was not sure he could prevent parents from shedding a tear or two.

As students filed into the school, several waved to their parents who took their time leaving the school grounds.

Click here to see more photos from the first day of school!