It may be a message students have heard before, but it is important enough to hear it again — the internet is amazing but can be dangerous. However, there are ways for students to keep themselves, and their friends safe.

Alexa Benincasa, a representative from the New York 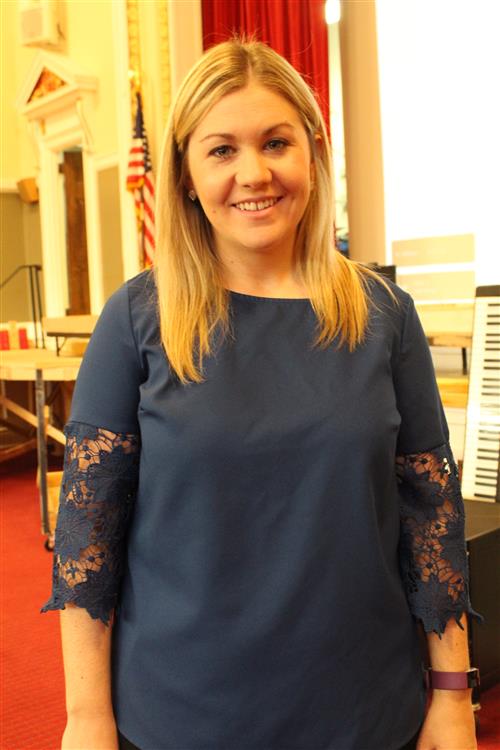 State Missing Persons Clearinghouse at the Division of Criminal Justice Services in Albany, visited Alexander Hamilton High School to share important information on how students can do just that.

When she asked students to raise their hands if they had a cellphone, most of them did. A high number of them also indicated they played video games online, used Snapchat, had an Instagram account, or used TikTok, Facebook, Twitter and Netflix.

“People share too much information online,” Ms. Benincasa  continued. “What I want you to learn today is to stay safe, but have fun.”

Ms. Benincasa encouraged students to think about anything they post online before they do so and to avoid risky behaviors. Some of those behaviors include sending inappropriate photos of themselves to someone, even if that person is a close friend, sharing inappropriate comments or photos, and visiting adult websites.

Before they post anything online ask themselves, “what does this say about me if I post it and could this get me into trouble?”

One of the dangers of posting or sharing posts is an individual has no control of where the information goes when it is shared by friends, whose friends can then continue to post or share.

“It can spread quickly,” Ms. Benincasa said. “It’s easy to lose control over who sees it.”

Things no one should ever post online include personal information, passwords, home addresses, locations, phone numbers and email addresses. Users should also take advantage of the privacy settings on their devices to protect themselves even further.

Ms. Benincasa also addressed the important topic of sexting. Many view it is a form of flirting or feel flattered when someone requests risqué images. However, usually the fall-out is terrible, resulting in the images being shared with people the sender does not know, which can lead to bullying, blackmail or possibly legal trouble.

If anyone ever feels threatened by a message they have received online or pressured to send inappropriate images, talk to an adult, Ms. Benincasa said.

Another concern online users should consider is how others may try to groom them, which is dangerous. Grooming can happen through flattery, sending gifts, discussing adult topics, asking them to keep a secret or to meet in person.

“If an adult acts interested in you it is a red flag,” Ms. Benincasa said. “Don’t engage them.”

She advised to block the person, unfriend him or her and tell a trusted adult.

Cyberbullying is another issue that many online users may contend with. The definition is “the use of technology to bully someone else.” It can come in the form of mean comments, photoshopping images of an individual in a compromising position or creating a fake profile.

Individual who are being cyberbullied may feel lonely, isolated and develop low self-esteem. They may not want to go to school or may try to harm themselves.

Again, the best thing to do if you are being cyberbullied is to block the person, make an e-report to the social media site on which it was posted, talk to an adult and create new accounts.