“Snowball fight” part of the reflection process during superintendent convocation

Latest instructional shifts have called for innovative ideas for student engagement. The same can be said for adult learning. That’s why crumpled up pieces of paper, or “snowballs,” were thrown around the gymnasium at the Alice E. Grady Elementary School. There were lots of laughs that went along with the exercise, in addition to encouragement from the superintendent of schools himself! 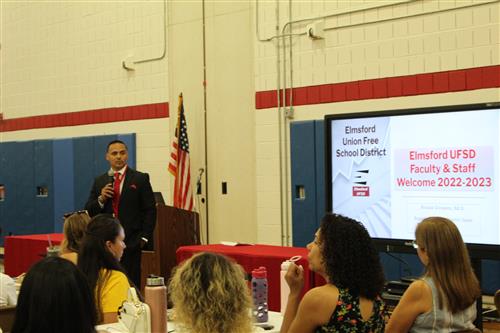 Before the paper balls went airborne, those gathered for the Superintendent’s Convocation, had undergone a serious reflection, writing on the pieces of paper three thoughts they were asked to share: “Today I am grateful for…”, “What is something the district goals did not address?” and “How will I contribute to our state of purpose?”

The snowballs were collected, and Superintendent Dr. Ron Gonzalez will review them as a way of learning more about his staff.

The “snowball fight” offered a moment of levity on this morning as district administrators and teachers focused on the serious business of teaching children as they prepared for the start of a new school year.

In his first address to staff as interim superintendent, Dr. Gonzalez shared elements of his own childhood that helped direct him to where he is today. He was raised by a single parent, spending early days between the Bronx and New Jersey, he admitted to developing a bit of a chip on his shoulder by the time he was in middle school, which drives his leadership stance. Things could have gone differently, he said, but he had teachers, administrators and coaches who supported him not only academically, but emotionally as well.

“I want you to fully understand the experiences I have had that helped me, so we can do this work together,” he said.

“Being an educator is a job you either love or you don’t do,” he told those gathered. “You have to go back to that place that motivated you.”

“We have an obligation and moral responsibility to make sure we are pulling the very best out of students,” he continued.

The district appears to have had a good start with this, as shown by student performances that were included as part of the presentation. A group sang the National Anthem, another recited a poems, and Alexander Hamilton High School junior Yuriy Kryvoruchko performed two pieces on his saxophone.

“Our duty is to make an impact,” said Board of Education President Paul Hood, after he welcomed Dr. Gonzalez to the district.

“This is a very special place to work. We have to prepare them to be the best they can be,” he said of the district’s students. “You bring the best because our children deserve the best to make this year the best.”

Dr. Gonzalez discussed his goals for the year. Among them are providing a safe and secure environment for students and staff, establishing systems and structures that support student success, increasing family and community engagement and continuing the equity and social and emotional learning going forward.

“I want to hit the ground learning,” Dr. Gonzalez told the Board of Education upon his hiring. “I want every interaction with every student, family member, staff, board and community member to know that we are driven by our purpose.”

He announced that by the end of September he will present the community with his “30 - 1st,” an update to be provided after the first 30 days of school where he will outline progress towards those goals.

Towards the end of the presentation, Dr. Gonzalez had his staff engage in one more airborne activity. This time they were tasked to work in groups and fold a piece of paper into a paper airplane. Teachers and staff were then asked to write an affirmation on the airplane before throwing it across the gymnasium, again, defying all classroom management protocols. Among the things that were written on them were, “We are fiercely capable,” “Everything is fine, keep going and growing,” and “The words we tell our children become their voice.”

“This is going to be a great year,” Dr. Gonzalez concluded. “I hope you keep this spirit going.”