Welcome back! Students arrived at school for another year

Back-to-School time can bring with it a mix of emotions: Students are excited, nervous, and ready to show off their new clothes. As for parents, well, they can be both happy and sad, or as one parent expressed, “relieved” at her families’ new circumstances.

“I’ve got two kids in the same school now!” the mom said as she dropped off her children at Elmsford School District’s Alice E. Grady Elementary school, noting how her morning routine just got easier.

Elmsford families were in full back-to-school mode on Sept. 6 as they returned to a familiar routine. They pulled up to the drop-off line then waved to their children as they walked into one of the three schools in the district. Some parents wrestled umbrellas as they carried their child’s bag of school supplies while managing to take the proverbial first day photos. Amid all this organized chaos, buses dropped off many more excited children.

Students at Alexander Hamilton High School, who were first greeted outside by Principal Joseph Engelhardt and Interim Superintendent Dr. Ron Gonzalez, met in the cafeteria before being dismissed to their classes.

Hatim Abdullah was all smiles, with reason. This is his senior year at AHHS.

“I am really excited to be here,” he said. “My aunts and uncles and a brother went to school here.”

Hatim was looking ahead just a bit, and said he wants to study computer science in college but is not sure where yet.

Freshman Elaiah Francis was sitting quietly. It was not only her first day at AHHS, but her first in the district having moved to the area from Charlotte, North Carolina.

She admitted she was nervous, but said she was looking forward to meeting new friends.

“I want to be here,” sophomore Malayija McFadden said. “Every day here is just cool.”

It was not long before a crowd had gathered outside the main doors of Alice E. Grady Elementary School. Students greeted friends they may not have seen over the summer as parents posed their children under a decorative balloon arch for a photo. Principal, Dr. Andrea Hamilton then directed students where to go once inside.

“I am happy about it being my last year at Grady,” said sixth grader Brookelyn Burch, who was glad for school to start.

“I get to learn more,” she said, adding math and science are her favorite subjects.

Her brother, Kisem Burch, who is in third grade, was waiting with his sister.

“I’m hoping it is fun,” he wished for this school year.

Their friend, sixth-grader Kiara Surrell, said she was nervous about meeting her teachers.

At the Carl L. Dixson Primary School, parents and students waited in one of two places. The youngest students gathered in the gym before being led to their respective classrooms while the first graders next door gathered outside before being greeted by one of their teachers. 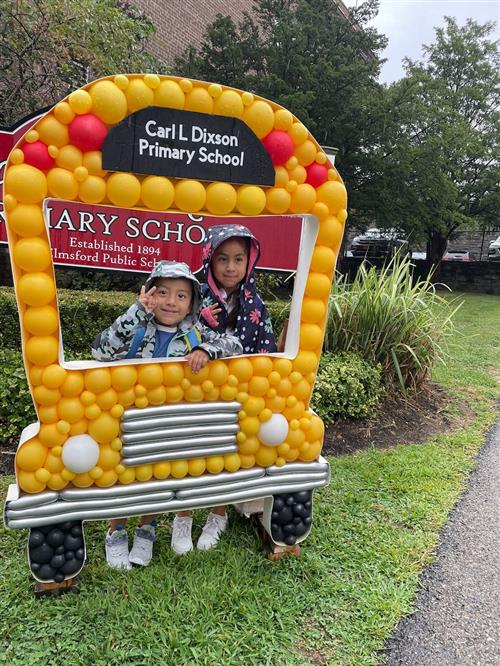 “It looks a bit hectic to an outsider,” Interim Superintendent Dr. Ron Gonzalez said, after participating in the morning routine for EUFSD families. “However, it did go well, and we are just so glad to be welcoming our students and their families back for another year of learning. No amount of rain was going to dampen this day.”

“It really was wonderful to be a part of this annual ritual,” he continued. “I think I might be just as excited as the students."