Passion for reading leads to semifinalist win in international competition

Alexander Hamilton High School Sophomore Brianna Rose was having a casual dinner with her aunts when she took a gander at her phone, a common thing for a teenager to do.

She scrolled through her school-issued email; after all it was Friday, and she would have assignments to complete over the weekend. What she didn’t expect to find was an email from the Ayn Rand Institute. 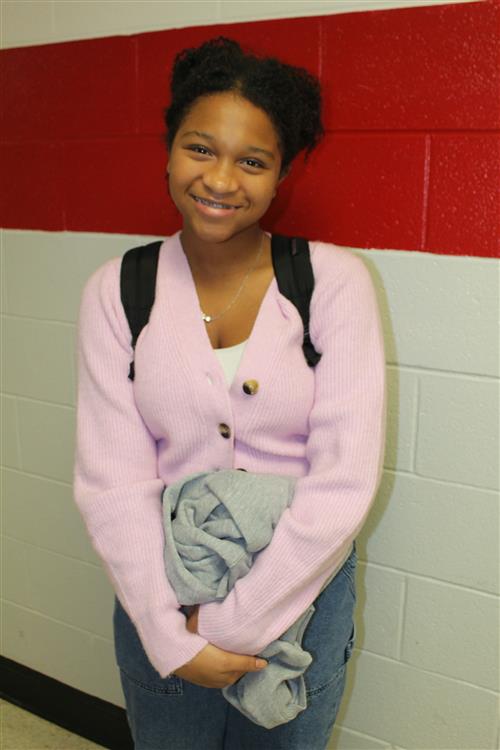 As a freshman in Keith Egan’s Honors English class at Alexander Hamilton High School, the class had been assigned to read Ayn Rand’s “Anthem” and submit an essay to an international competition that was sponsored by the institute.

The email informed her that she was a semifinalist in the competition that had students submitting their work from countries including Canada, Nigeria and South Korea.

“For the rest of dinner, it was all I could think about,” Brianna said. She notified her parents immediately, who shared her excitement.

“When we entered the competition, I didn’t expect anything to come out of it. But as soon as I finished the book, I began to write my essay. I really liked the book. It’s such a different point of view. It stayed with me.”

“Anthem” is a dystopian novella first published in 1937. It tells the story of a man named Equality-7-2521 who lives in a society where technology and individualism have been suppressed. The man rebels and escapes with his girlfriend, who he was forbidden to fall in love with. The two plan to create their own society.

In describing the story, Brianna said that the main character uses his selfishness for his own self-interest - something that is strongly discouraged in society.

“It’s such a different point of view from what we are used to,” Brianna said. “We are told that selfishness is a negative. From my point of view, sometimes you need to be selfish to get by in life.”

The book is one that Mr. Egan has his freshmen class read, in part, because “Rand referred to her book as a ‘hymn to man's ego.’ It is the story of the struggle of the individual versus the collective, totalitarian society. The novella asks students to question which philosophy of life allows a human being to be truly free and a society to truly progress. ‘Anthem’ offers the opportunity for deep thought and complex debate.”

It also affords students an opportunity to write and to share their writing. Mr. Egan stressed that that was the point of writing.

“Publishing is the natural, final stage of writing,” he said. “Entering the contest every year supplies many students with the impetus to write their best and the drive to push themselves beyond what even they may think themselves capable.”

Additionally, Mr. Egan said that the competition is judged fairly and that the institute supplies the books to his class. There are also cash prizes. If they win, he said, students can include the achievement on their resumes.

English and history are Brianna’s favorite subjects, and she loves to read more than write. She recently read “The Priory of the Orange Tree,” by British author Samantha Shannon, and the fantasy novel “Legendborn,” by Tracy Deonn. She has recently begun to read the “Game of Thrones” series by George R.R. Martin.

“I really liked Mr. Egan’s class,” Brianna said. “You can tell he is really passionate about English.”

Outside of school, Brianna’s interests include Greek mythology, which she enjoys discussing especially with Mr. Egan during free periods. “I can talk about it until other people are sick of it,” she said.

“I was thrilled, but not shocked, when I heard that Brianna had become a semifinalist,” Mr. Egan said. “She worked diligently last year to improve her already strong writing style. When working with her partner on a writing assignment in class, I would often hear the two young ladies brainstorming ideas for the perfect word they needed for a sentence. Their attention to connotation and tone was inspiring.”

Mr. Egan is also impressed with Brianna’s love of reading.

“Brianna also happens to be a bibliophile. She and a small group of her peers burn through unassigned books faster than Guy Montag in ‘Fahrenheit 451.’ The diverse titles they choose all spring from the pages of The New York Times bestseller list. These ladies mean business.”

His students hard work and interests have made her a standout student.

“Brianna is one of the most soft-spoken, unassuming, kind and intelligent young ladies I have had the pleasure to teach over my 24-year career at Alexander Hamilton,” Mr. Egan said.

For all her love of English and history, Brianna also leans toward the sciences. Thinking about her future, she hopes to become a veterinarian, especially after having worked at a horse stable this past summer while visiting family in Jamaica. She is also thinking of the possibility of becoming a gynecologist, lawyer or journalist.

“Being a veterinarian is first,” she said, adding that she has a dog and several fish. “I need to be with animals more than humans,” she said with a laugh.