It was standing room only at the recent Elmsford Union Free School District Board of Education meeting held on Oct. 12. Gathered in Village Hall were members of the district’s board of education and Village Trustees along with community and school supporters. They came together in an annual tradition, hosting a joint meeting.

“We thank them for joining us,” Mayor Robert Williams said. “Eighteen years ago, I came up with an idea. It’s nice to show unity.

“We have a great working relationship with our schools,” he said.

The Board of Trustees proceeded with their agenda, attending to village business. This included acknowledging local businesses and addressing a renovated building along with applicants who were installing solar panels on their property and swearing in new members of the fire and police departments and the appointment of a new village clerk.

In addition, the mayor acknowledged the work the village and school district both do toward preventing bullying, as October is Anti-Bullying Month.

“It’s unique and has been successful,” Mayor Williams said of the anti-bullying campaign. “Because we made it a community effort.”

“I’m proud to work with our school partners,” he continued.

It then was the school board’s turn to hold their meeting. 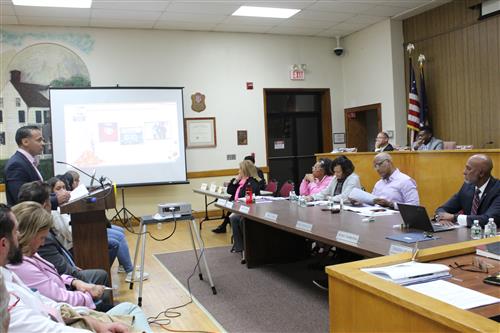 During his presentation Interim Superintendent Dr. Ron Gonzalez presented those in attendance with his building blocks for success, among them are providing a safe and secure environment for students and staff, establishing systems and structures that support the work the district does, increasing family and community engagement and continuing the equity and social and emotional learning going forward.

“Thank you mayor for your support,” Dr.  Gonzalez told the village trustees. “This is uncanny for a school district to partner with a municipality in the many ways that we do. It speaks volumes to your commitment to our schools.”