“Hi, I’m Sabrina,” a young girl announced after walking up to where teacher Kacie Schulman was sitting. The two chatted for a minute before the girl took off to go finish her lunch.

It was a perfect example of exactly what Ms. Schulman was hoping for — students taking an initiative to get to know other people. 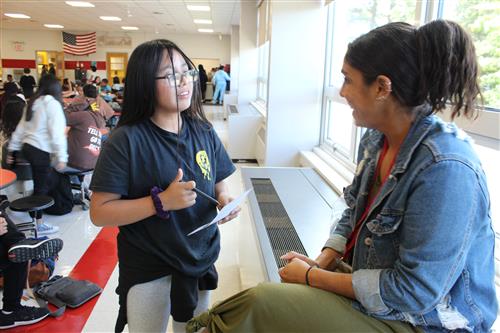 For the fifth year in a row, students at Alexander Hamilton High School have been engaging in “Start with Hello Week,” an initiative hosted by the Peers as Leaders, or PALs, student organization. Throughout the week students engage in different activities to help them get to know one another, find new friends, and have some good old-fashioned fun.

During the week-long event, students and staff take a day to wear a name tag, enabling others to learn the names of classmates and those they see in the hallways. There are activities during lunch periods, for example, students were encouraged to sign a Start with Hello Promise Pledge, that suggested they have empathy for others, reach out to their peers to prevent anyone from feeling isolated and to be an upstander, and use their voices when they see something wrong, and to simply say “hello” to others.

Another lunch activity was Start with Hello Bingo. During lunch, Bingo cards were passed out and each square had a suggestion such as “find someone who plays a sport,” or “find someone who likes cats better than dogs.” As their cards filled up upon completion of the suggested activity, students could earn candy from a PALs representative.

Ms. Schulman also has PALs members decorate a board outside of her classroom on a regular basis. Currently there are messages of welcome posted there.

The week culminates in a bit of a frenzy, on Friendship Friday, each students receives a laminated emoji. Throughout the day they must find other students who have the same emoji they do. The group then visits Ms. Schulman’s classroom for a prize.

“It’s a great way to bring kids together,” Ms. Schulman said of the emoji game.

And that is why all these activities take place.

“My mentee still says hello to me and gives me hugs in the hallway,” sophomore and PALs representative Alana Lewis said. “That goes a long way in fostering a friendly environment here.”

When Alana was a seventh grader, she recalls having a mentor and it helped her come out of her shell a bit. She said just giving someone else a smile in the hallway can be enough to make others feel good about themselves.

“I think it fosters a good community in our school,” PALs member and sophomore Matteo Diberto said of the weekly activities. He was helping to pass out candy to those who had completed their “Hello” Bingo cards.

Sophomore Suvan Arachchi said he joined PALs because he was interested in mentoring and appreciated the assistance his mentor provided him when he first got to the school.

Programs like “Start with Hello Week” help remind students to be respectful and shows them how to be a leader. He thinks it caught on because students anticipate it now that it has become an annual event at the school.

“I hope they get the message that this is a whole community,” he said.

“It’s all about inclusion,” Ms. Schulman said, and making every student at the school feel welcome and know they have friends and have an opportunity to make new friends too.

Throughout the year PALs will continue hosting events including assigning an upper classman to mentor a new seventh grader. Later in the year they will roll out a Pen Pal program with sixth graders at the Alice E. Grady Elementary School.

“It’s a really cool way to bring the school together and I just love that,” Ms. Schulman said.

She has also noticed how students are developing their leadership skills and are getting a boost of confidence through the PALs program.