When the towers that students were creating crashed onto the gymnasium floor, the crash and the groan were almost simultaneous. Although, all was not lost! A few giggles erupted and soon students at Alice E. Grady Elementary School were rebuilding their structures in the hopes of going even higher.

Each grade had an opportunity to participate in the Tarrytown-based Regeneron Day of Doing Good. It is an initiative that began in 2017 and has Regeneron staff volunteering in the community. The company works with Volunteer New York to coordinate activities. Regeneron volunteers have visited and worked with students at Grady for several years now, both in person and virtually during the pandemic. Together they engage in a science-related activity. 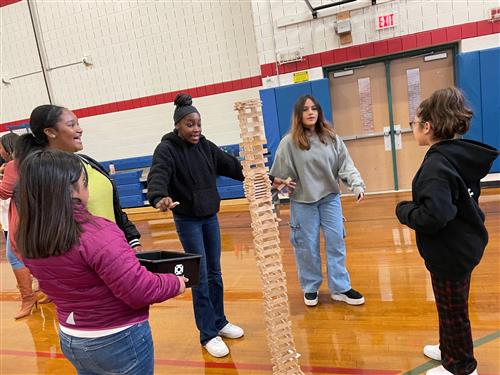 On Oct. 21 students built structures out of Keva planks, which were brought over from the Westchester Children’s Museum. Volunteers began by teaching students about the concepts of gravity, balance and stability.

“You are going to learn how you can become an engineer and architect,” Beau Dubac, the outreach coordinator with the Westchester Children’s Museum, told students.

Once students got a sense of how to use the planks by first building boats and bridges, they moved on to the Tower Challenge.

Working in groups of four or five, students brainstormed how best to build the tallest tower. Some began with a sturdy base, others went for it by piling the planks one on top of the other, while other groups piled on, but stabilized the structure every few inches.

“Just don’t breathe,” one desperate student said aloud as her group’s tower became taller than her own height.

“AHHHHH,” came a shout of surprise from across the room as a group’s tower fell.

When the students’ time to build was over, Mr. Dubac measured the height of each structure. The tallest for this session measured 5’10”.

“In the middle of it, it started moving a lot,” sixth grader Kiara Surrell said of her group’s tower, which ended up as the tallest. “We were just going straight up, but we made sure it was stable on the bottom.”

“It was taller than I would have expected,” said her groupmate, Kamryn Bostic. “I didn’t know if it would last so long.”

Another student in the same group, Cassie Tascon, said that the project was fun: “It was even taller than anything we had done when studying STREAM,” she said, referring to science, technology, reading, engineering, art and math.

“It took a lot of teamwork and effort,” added Linda Zhinin, a fellow group member.

“It was fun,” Selina Tapia, another group member concluded. “I got to do it with my friends.”

Once the soaring structures were measured and a winner was selected, students then used them for an impromptu game of Jenga, where they had to pull the planks out of the structure to see how many they could remove before their tower fell over. 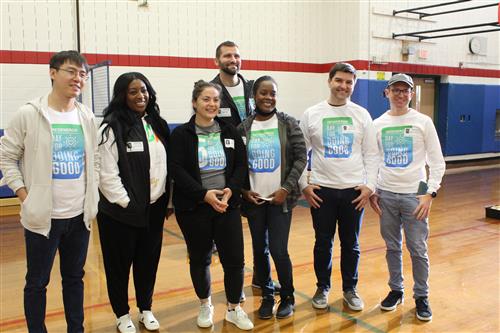 For Regeneron volunteer Lili Blumenberg, an associate scientist of bioinformatics, the day was personal. Having recently had a baby, she wanted to interact with older children so she could get a sense of what is to come.

“It’s so exciting to work with kids on engineering,” she said. “It makes you excited for what we do.”